Thanks to Nosyd and to Gravgunner who have aggreed to answer our questions.

When and how did your guild was created? If it's not a guild created for TCoS, in which other games can we meet your guild?

Nosyd: The Maelseekers was created by Daimos, who is no longer with the guild. It was created especially for The Chronicles of Spellborn game. Creation date would be July 2006.

Which is the main activity of your guild (PvE, PvP, Roleplay, Trading / Crafting)?

Gravgunner: None, we seek out into the Maelstrom, to seek new shards, find new places and enjoy the world. Besides that I think the focus is mainly on RP (check out some of our talented RP writers we have in our RP section of the forums) and PvE but that doesn't say that people that do other kinds of things aren't welcome.

What attracts you in TCoS?

Gravgunner: I can't speak for the others in the guild but I'm attracted to the non-standard(MMORPG standard) way of combat and how the world fits in all of it. Besides those points I just think the game will rock!

Will your guildmates be free to choose their own House or do you want that all guild members choose the same House?

Nosyd: Every member is free to choose a House but we do encourage to all choose the same House. (A decision will be made soon to decide if we go with one house or stay with a multi-house theme)

What do you think about TCoS combat system?

Gravgunner: As stated above, it is non-standard to the MMORPG world since you have to aim where you hit and all, I think it's a refreshing change from the regular macro-button bashing.

What is your opinion about TCoS classes?

Gravgunner: Pretty standard and not at the same time, you got your warriors, mages and Rogues but then a bit different, they are all more specialized then in other games(AFAIK) so fighting in a team requires more tactics.

Is there a prefered class in your guild? If yes, could you explain why most of your guildmates prefer this class?

Gravgunner: It's pretty well spread from the first thoughts they have given off in a thread we have running on such things, but the balance tilts slightly to rogues and in particular face dancers.

What do you think about TCoS crafting?

What is your opinion about TCoS PvP?

Gravgunner: I think it will be be rather interesting, especially because of the combat system but also because the statement that a level 10 can open up a can of whoop &*#^*% on a level 15 character(provided the lvl 10 is elite player and the 15 average)

If you had one suggestion to send to Spellborn NV, what would it be? 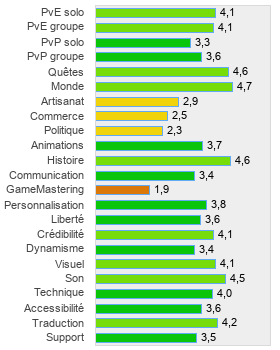